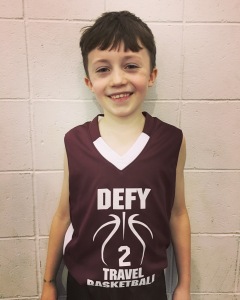 My oldest son, Calvin, is 9 years old. This weekend, he had a basketball tournament about an hour from home. The bracket didn’t make much sense, but was explained to the parents something like this “Saturday: If your kid wins, then they’ll play again soon. If they lose, you have to wait 5+ hours to see if they lose again. If they win any games, you have to come back tomorrow to do the same thing.”

Of course we wanted his team to win. We wanted them to win the whole damn thing and bring home the trophy. (Was there a trophy? I don’t even know.) But what we also wanted, more than anything, was to go home. I talked to my dad on the phone en route to Calvin’s second game on Saturday.
“I bet you never imagined your parents were rooting against you sometimes,” he said. Well, shit. The words were so true.  I was *secretly* rooting for Calvin’s team to lose, so we could all just go home.

The little glimmers of awesome:
Saturday, we left home at 6:30am for his first game, which started at 8:00. They lost. Then we had four hours before his next game, so there I was with two of my sons, and I was not excited. I toyed with driving an hour home, but settled on a 20 minute drive for lunch on the water with my oldest and youngest. Quality time is a simple delight for this momma.

Back at the gym, game two was a WIN!  Back tomorrow… yay?

Sunday’s first game was at 11:00am, which made for a much more manageable morning.  They won (proud momma), which meant we played our friends from HOME! The *other* Ellsworth boys. The friendship shined bright during this game. Opponents on the court applauding their friends’ shots. It truly did not matter who won this game. Perhaps the best part of knowing the other teams parents? It turns out we ALL wanted to go home. Calvin’s team won, but it was a close game. What happened afterwards was the highlight of my weekend. These boys, both teams, came together for a team photo.  “All the Ellsworth boys!” I won’t share that photo here because I don’t have permission from all the parents, but I want you to imagine 18 3rd & 4th grade boys smiling so hard their faces could crack, arms around each other, in two rows. One team, half in white shirts and half in maroon. Perfection.

We lost the next game, but no one cared. Our boys came in third overall. They played their hearts out and had FUN.

I was glad we lost. Calvin’s three younger siblings were glad to go home, too. We were all tired. I’ll tell you, though, Lucy, Eamon, and Rocco were champs.  No complaining. Little misbehaving. Lots of snacking and screen time. It’s all good.

Now on to soccer season.

View all posts by BeanCarter